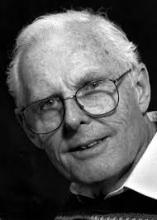 Walter Pitman O.C., the pioneer of arts and learning in Canada passed away last month after a lengthy illness.

He was not only a CNAL “National Champion” but also the first distinguished recipient of the CNAL Tribute Award in October 2008.

On behalf of our Chair, Larry O’Farrell, I am pleased to make a few comments about the importance we attach to this remarkable Canadian. As you will see from the biography which follows, Walter played a multi-faceted role as a teacher, politician - both provincially and federally, college administrator, President of the Ontario Institute for the Study of Education, Executive Director of the Ontario Arts Council; and as a biographer of several leading Canadian artists.

Throughout his different careers he showed an uncanny ability to inspire and motivate all who came into his life, particularly those, who like myself, shared his passionate belief in the importance of exposing young minds to the arts and of lifelong learning in the arts. During his term at the Ontario Arts Council, ably assisted by Bob Sirman and other OAC staff, he led numerous efforts to enhance the training of artist-educators - and improve the working relationships between them and arts teachers.

In paying tribute to him in 2008, I referred to Walter as an “extraordinary Canadian” and reminded those in attendance at the CNAL Tribute Dinner at Queen’s University of his bold decision to organize the first international conference on the arts and education held at OISE. Not only did he organize and host this seminal event, he joined with other distinguished speakers, such as Nobel Prize winning physicist, John Polanyi, in speaking passionately about the need for all children to experience the arts and the need to encourage their innate creativity.

In a letter which Walter wrote to me several years later, he reflected on the serious challenges facing the arts at all levels of our provincial educational systems. He was convinced that there would be a diminution of core subjects such as art and music, with the inevitable cutting back of specialist teachers. Sadly prophetic.

In spite of his heroic advocacy efforts over the years, Walter was delighted by the launch of the Canadian Network for Arts and Learning (CNAL) to take up the cause.

Larry O’Farrell and all of the Members of the CNAL Board and staff remain inspired by Walter’s work in pointing the way to advancing the mission to which we are all so deeply committed.

"The arts are, above all, how we express the finest elements of our humanity, our understanding, our compassion, our caring, and our love."

Officer of the Order of Canada and Member of the Order of Ontario, Walter supported the arts, education, social justice, and environment. Throughout his distinguished career, he wore many hats including: history teacher, politician, university Dean and President, arts foundation Director, and more recently: the official biographer of renowned Canadian artists such as Louis Applebaum, Harry Freidman, Mary Morrison, Elmer Eisler, and Victor Feldbrill.

Born in Toronto to Ernest and Elsie Pitman, Walter later married his lifelong partner Florence Ida Collinge (1925-2016). He and Flo were generous advocates of arts and culture, visiting galleries and museums, and attending the symphony, opera, and theatre—almost daily. Their home played exhibition and gathering place, celebrating the couple’s commitment to creativity, as well as their family comprising four children, 13 grandchildren, and 10 great-grandchildren.

Walter began his career teaching history at Kenner Collegiate in Peterborough before moving to history department head at Langstaff Secondary School in Richmond Hill. In 1960, he became the first New Democratic Party (previously New Party) Member of Parliament for Peterborough. Following this, Walter returned to education to become the Dean of Arts and Science at, a then new, Trent University. In 1967, his combined experience led him back to the NDP as Education Critic, chair of the NDP caucus; and in 1970, he was promoted to Deputy Leader of the Party.

Walter was later named President of Ryerson University (then Ryerson Polytechnic Institute). Post-Ryerson, he took the role of Executive Director of the Ontario Arts Council, before moving to Director of the Ontario Institute of Studies in Education (OISE) at University of Toronto. In addition, he was Chair of: Elderhostel Canada, Ontario Education Association, Canadian Association for Adult Education, Energy Probe, Arts Education Council, Canadian Civil Liberties Association, Project Ploughshares, and Interim Waste Authority. Walter was also a Board Member of National Ballet of Canada, Toronto Mendelssohn Choir, Toronto Children's Chorus, and Campaign Against Child Poverty, and a founder and steering committee member of For Our Grandchildren.

In 1992, Walter created the first international conference focused on arts and education in Toronto, which attracted global attention. He also championed teacher training—in particular, the added value of encouraging specialist arts educators to work with artist educators. In the same manner Walter was inspired by artistic leaders, he too motivated those who shared his belief in the importance of exposing young minds to arts. Ensuring all children had access to cultural experiences was his life-long mission.