Music Monday at Home, presented by the Coalition for Music Education in Canada 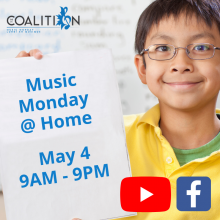 On Monday, May 4th, thousands of Canadians will once again celebrate Music Monday. Produced by the Coalition for Music Education in Canada for the past 15 years, Music Monday 2020 is transforming into a 12-hour digital broadcast featuring Canadian music and musicians in communities from coast to coast to coast, allowing every Canadian to celebrate safely.

Beginning at 9AM EST, Music Monday @ Home will showcase the diversity, creativity and resilience of the nation and feature live  performances, favourite memories, and special messages from prominent Canadians, ending with a virtual afterparty. Confirmed performers include:

Programming from Quebec will be presented in French.

Additional programming aimed at younger children will be provided by Charlotte Diamond, Early Years programming from the VSO School of  Music, and children’s performer Chris McKhool.