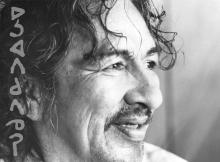 Celebrated Ojibway artist Norval Morrisseau was born in Fort William, Ontario, in 1932. Raised by his grandparents, he learned at an early age the teachings of his heritage from his grandfather Moses (Potan) Nanakonagos, a Midé shaman. The most widely recognized themes in Morrisseau’s artworks address the oral traditions and teachings of the Midewiwin as seen in petroglyph rock paintings of Northern Ontario. A common theme throughout his entire body of work is the exploration of spirituality, allegory, and representation. Using the narratives of the Ojibwa oral traditions, Morrisseau created a new visual vocabulary that gave many of the teachings of his people an image for the first time. However, traditionally in his culture only the shaman had the right to paint the sacred teachings, and thus his work invited criticism from the elders in his community. Morrisseau maintained that he was a true shaman, because it was the shamans who were the artists of his people:

“I am a shaman-artist... My art speaks and will continue to speak, transcending barriers of nationality, of language and of other forces that may be divisive, fortifying the greatness of spirit that has always been the foundation of the Great Ojibway.”

Morrisseau also explored other themes in his artwork, always dealing with some aspect of his own spirituality. The Christian religious iconography that he became familiar with during his childhood years at St. Joseph Catholic School in Thunder Bay, and his interest in mysticism after his conversion to the Eckankar religion in 1976, are both subjects of his art. After 1957, Morrisseau signed all of his artworks in Cree syllabics using his Ojibway name: Miskwaabik Animiiki, Copper Thunderbird. The Thunderbird and other totemic figures such as the bear, the turtle, and the snake are subjects frequently found in his work. Other common motifs include shamans, plants, animals, ceremonial processes, and spiritual creatures. By using the X-ray style that he is now recognized for, Morrisseau was able to reveal the inner soul of the figures within his paintings.

Each of Morrisseau’s pieces can be viewed as a narrative because his unique vocabulary of symbols and colours has been used to create a visual language. Morrisseau intended his art to convey the spirit of his people:

“My paintings are ... icons; that is to say that they are images which help focus on spiritual powers, generated by traditional belief and wisdom... I bring together and promote the ultimate harmony of the physical and spiritual world.”

Morrisseau’s career as an artist spanned many decades, during which time he was awarded numerous accolades: in 1978, Morrisseau was made a member of the Order of Canada, in 1986 he was acknowledged as a Grand Shaman of the Ojibwa, in 1995, he was awarded with the First Nations’ highest honor, the Eagle Feather, and in 2006 he became the first First Nations artist to have been awarded a solo exhibition at the National Gallery of Canada. However, perhaps the most significant achievement of Norval Morrisseau’s career was his ability to communicate through his artwork the richness of the cultural traditions of the Anishinabe.

The Buhler Gallery is located in St. Boniface Hospital, a centre of healing, and is the first dedicated art gallery of its kind in Canada. St. Boniface Hospital recognizes the benefits of the arts in health and healing, its impact on the fabric of daily life and the community as a whole. By establishing this space, the hospital is enhancing the role of the arts in health and well-being. Open to all patients, visitors, physicians, volunteers and staff since 2007, its goal is to provide an oasis of hope, healing and contemplation by engaging visitors in high quality visual arts programming, music, panel discussions and performances.