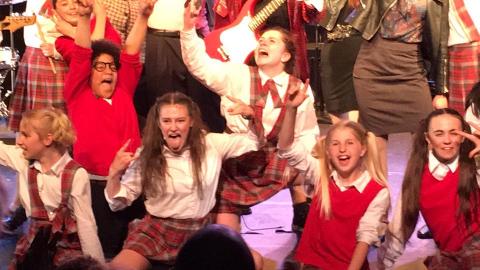 WST's StudioWorks Academy was launched in 2004 to provide emerging musical theatre artists an outlet for intensive training. It is a two-tiered program combining in-class instruction and production work. The Youth Ensemble offers year-round classes in triple threat technique for students aged 10-18 (summer and fall/winter sessions). The Adults Only program runs a fall/winter session only.

The troupe made their theatrical debut at the Winnipeg Fringe Festival in 2004; since then they have performed in DisneyWorld as part of the Magic Music Days program, made several tours to New York City for Broadway training opportunities and was  featured at the Canada Games 2017 Opening Ceremonies. Selected past productions include: Legally Blonde, Urinetown,  Seussical the Musical, Thoroughly Modern Millie, Forbidden Broadway, Edges, Love Notes, First Date, Last Kiss and most recently the sold out production of School of Rock which combined the youth/adult ensembles.

Program Details
The programs are specifically geared for students who wish to improve their skill level in musical theatre and performance technique. It runs Wednesday evenings from 5:45-9:45 pm at the U of Winnipeg’s Dept. of Theatre and Film. The training consists of vocal work, movement and dance components and script work leading up to a fully produced book musical in late May.  Additional rehearsals are incorporated into the schedule prior to production dates. A total of 20 students are accepted into the program annually and gain entry through audition only.

Adult Ensemble
The 20 week, 60 + program annual fee is $800.00 (paid in two instalments)
- Classes commence in September and run thru March.
Bursaries are available for both programs and are based on audition and financial need.